On a sunny September afternoon, six teenagers spread out on the basketball court at the Roxie Ann Sinkler Recreation Center on the west side of the city. But they weren’t playing three-on-three. They were giving the well-worn asphalt a makeover.

They sprawled on the ground with paint brushes or stooped over long-handled paint rollers, applying vibrant shades of teal, fuchsia, rose, orange, white, and gray to triangular and diamond shapes outlined on the pavement. The painters worked mostly in quiet intensity, punctuated by the buzz of cicadas and shrieks of children in a nearby splash park.

It was the last day of painting the third and final basketball court for the year’s Peculiar Asphalt project, a city-run Summer of Opportunities Program (SOOP) that for the past three years has brought groups of young Rochester residents, ages 16 to 20, together to design and paint murals on city basketball courts.

The murals range in style from Art Deco or Art Nouveau-esque to abstractions of landscapes or simply bright colors. 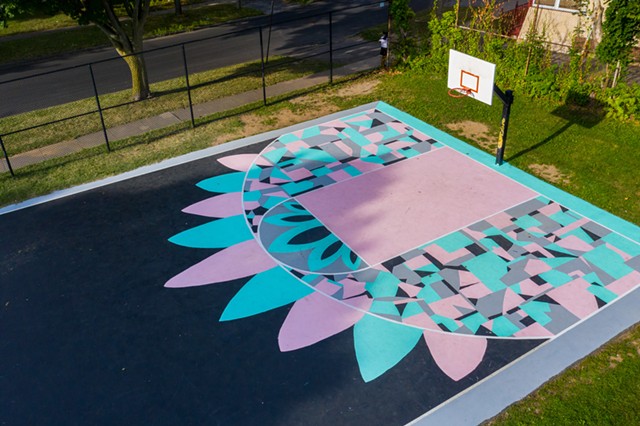 On this day, the painters were putting the finishing touches on an abstraction of mountain peaks designed by Paris Cockrell, an 18-year-old School Of The Arts graduate who was in her second year in the program.

Like the others, Cockrell got involved with Peculiar Asphalt through another city mural program, Roc Paint Division, which has employed both local professional artists and youth to install murals around the city. 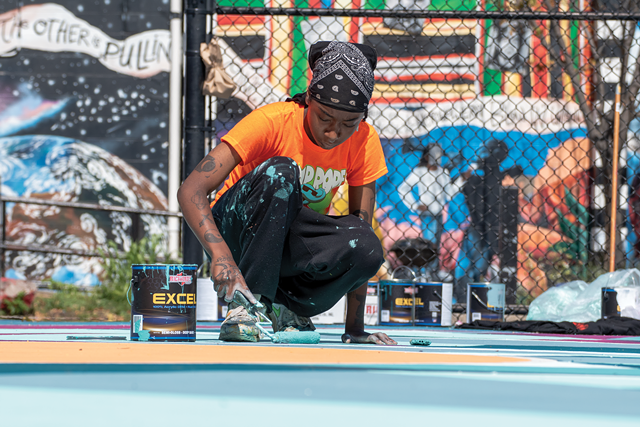 City Public Arts Coordinator Brittany Williams leads the Roc Paint Division program along with muralists Justin Suarez and Sarah Rutherford. She cast herself as merely the facilitator for Peculiar Asphalt, with young people being the artists behind the basketball court murals. 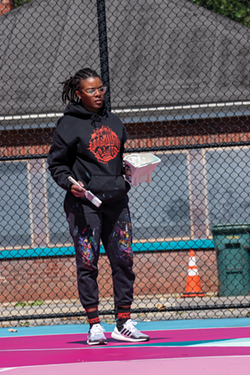 Williams became aware a few years ago of a trend taking hold in the United States and Europe of outdoor basketball courts being used as the canvas for murals. It appeared to have begun in Memphis, she recalled, where the fixing of nets and repainting faded lines evolved into a full-blown mural.

She pitched the idea to city officials. But the concept was foreign. Some had questions about whether the colors would interfere with the playing of the game of basketball. As a former basketball player, Williams assured them that wet pavement and glass and debris on the court were far more distracting than the colors underfoot.

They gave her the go-ahead for a full-court press.

On each of the courts her crew has transformed, the boundary lines are clearly defined. There is the free throw line, the three point line, the center circle, the half-court line, and so on. The rest is an abstraction that becomes a pleasant blur of color to players moving quickly.

The name of the project came from Williams trying to think of snappy words for “different” and “pavement” that sounded cool together. A thesaurus helped her come up with “Peculiar Asphalt.”

The design process varies. Sometimes each member of the team creates a design on a template of a court using markers or colored pencils, then they work together to take elements of each to incorporate into a final design. Other times, one member takes the lead on designing, with input from the others on the color palette.

Marcus Austin, 17, a senior at Pittsford-Mendon High School, designed pages for coloring books that were mass-produced and distributed to area libraries before being invited to join Peculiar Asphalt this summer. 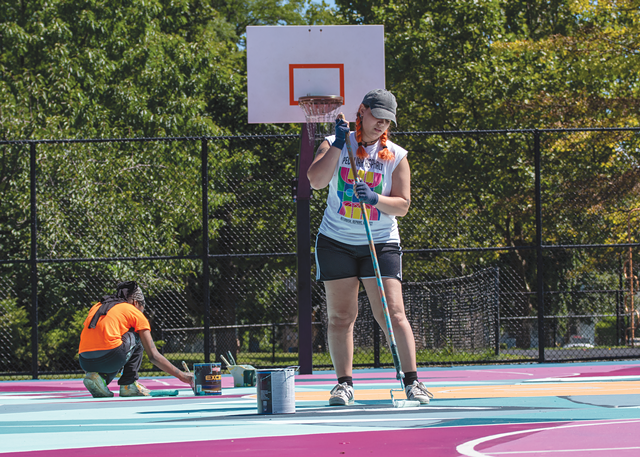 He recalled being excited about working with other artists, but also uneasy about collaborating.

“Initially, I thought it’d be not necessarily frustrating, but not as easy just because there are different opinions,” he said. “But thank God, there’s no clashing. It’s actually, I think, better for me working with a group because I can bounce ideas off others very quickly.”

He said the work has been rewarding.

“I like hearing from either adults or even little children, which surprisingly have been most of the compliments we’ve gotten,” Austin said. “A lot of little kids saying thank you and stuff like that, so it’s nice.” 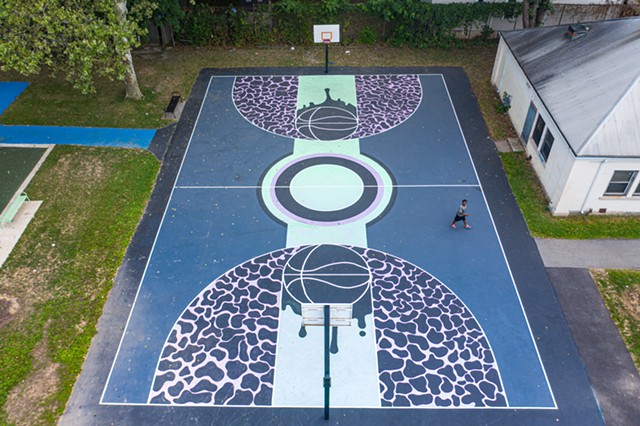 Williams assembled the first Peculiar Asphalt team out of the Roc Paint Division, whose crew had experience making murals. But painting skills were not the only prerequisite.

The program is fun, but it is, after all, work. Participants are compensated $10 per hour by the city, and expected to work 20 hours per week during the season. 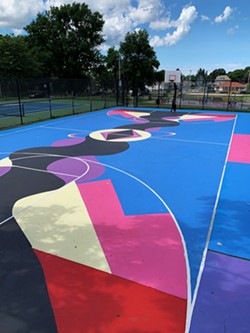 “Of course I want some workers who have the skill to illustrate a design,” Williams said. “It’s important to get the ones who are good at detail and being patient. Basically, it’s just work ethic.”

The participants proved their work ethic that first season, in the summer of 2019. The project was funded by a grant meant to cover materials and compensate the participants for enough hours to paint two courts. But the teams worked so efficiently that they had time to do another court that first year, and did three courts the second year as well.

They also spent time custom-painting basketballs to be given to neighborhood kids who Williams said would hang around courts where older kids were playing, waiting for a chance to borrow their ball. 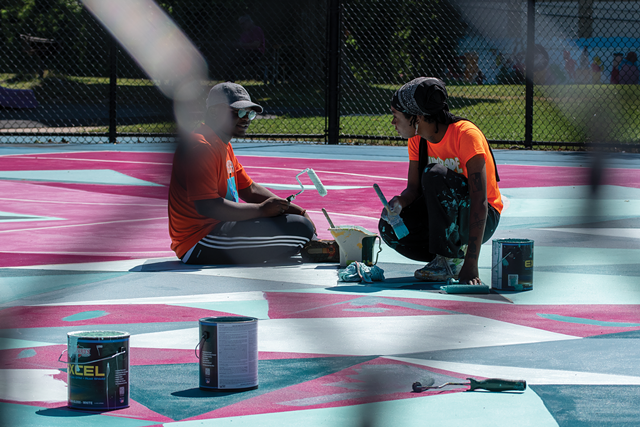 Wrapping the year with the Sinkler Recreation Center is close to Williams’ heart. She’s an avid basketball player and a past coach at Roberts Wesleyan College. She recently bought a house around the corner from the center, and her grandmother lives in the area.

Peculiar Asphalt has not just added a splash of color to basketball courts around the city. In some cases, its work has made the courts functional again.

For example, as Peculiar Asphalt members recall, the court at the Marketview Lodge on First Street was missing its lines, the hoop rims were bent, and the nets were in disrepair before painting began. Broken glass littered the pavement.

After the group gave it the mural treatment, area residents began using the court. Now, by 3 p.m. most days, there is a group of people playing basketball.

“When they saw that someone’s coming into their neighborhood court and fixing it up, they’re like, ‘Wow, they’re doing this for us,’ where you know, that doesn’t happen often,” Williams said.

Rebecca Rafferty is CITY’s life editor. She can be reached at [email protected]