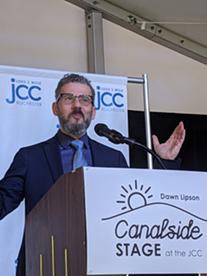 A tented outside phase on the tennis courts of the Jewish Group Center of Increased Rochester will be the site of a new collaborative executing arts series this summer time.

The Dawn Lipson Canalside Stage will host a selection of concerts, theatrical performances, and film screenings, beginning on June 5 with an encore efficiency of “You’ve Got a Pal: The Music of Carole King and James Taylor” and concluding in September with Rochester Fringe Pageant performances however to be declared.

“I’m basically thrilled to stand right here at the Dawn Lipson Canalside Stage and announce the arts are back again,” Ralph Meranto, JCC CenterStage Theatre’s inventive director, claimed Wednesday in announcing the series. “The arts are alive, and the arts are a essential part of our community’s economic and cultural health.”